Yesterday we saw some of the challenges, criticisms, and bawdy jokes tossed at the iPad. Today we turn to some of the reviews and ideas that could well make the iPad the kind of ‘game-changer’ that even Windows users expect of Apple. 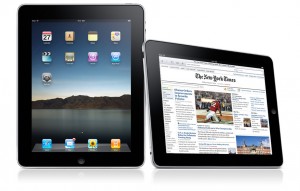 The e-reader market is clearly growing, if slower than its hardware makers would like. Many content-providers, though, have gone on record as saying that the iPad will be just the kickstart the industry needs. For example, Tyrrell Mahoney, Vice President of Sales, Marketing & Business Development at Chronicle Books, believes his publishing line would greatly benefit with the interactivity and cross-referencing that the multi-media iPad offers (and the Kindle and Nook do not – at this point). And Arthur Ceria, chief creative officer of CreativeFeed, believes the content-providers need to step up up their game to match what Apple is offering: “You have to do more than just port the material over, we should be thinking along the lines of finding new ways to present content, make it more social and part of the online conversation. Make it more interactive…”

How might community-action groups and nonprofts consider the iPad and its ilk? It seems to me that thinking about the iPad as a recently released, cool, product, is precisely how not to think of it. If we do, we might dismiss it as something for corporate types and kids with too-fancy toys (Steve even used the example of charging his iPad and watching video non-stop on a 10-hour flight to Japan. To grab his evening’s sushi, one might presume…) Indeed, I’ll go out on a limb here and ‘predict’ that the iPad will take a while to start to attract followers. It does not seem an obvious upgrade to anything, and in our recession folks still might be wary of plunking down even $500 for a cool, if seemingly unproven, niche technology.

But don’t drift to complacency! Faruk AteÅŸ, a web developer and blogger in the Netherlands, had some sharp insights into the advantages that the iPad has over other netbooks/webbooks. In particular, he pointed out that the technology seems new, but (unlike what Google is trying to do with cellphone makers) is in fact a collection of proven & popular technologies: iPhone hard- & software, user skills picked up on said iPhone and the iPod Touch, and tens of thousands of ‘apps’ already for the iPhone/iPod Touch that are all ready to go on the iPad.

For the nonprofit community, the big news should not be the iPad as an object, but the iPad as a gateway to resources under-appreciated in our sector. The fact is, computing and communication technologies have been going portable and up into the ‘cloud‘. People’s attentions, and money, are going that way as well. The growing expectation is that one’s information is on-line and always available – that one’s enterprise is always reaching out to potential customers and clients with Tweets and Facebook updates. The skill is to do so strategically, not slavishly. And all communication devices (smart cell phones, netbooks, iPads, whatever) are pointing in that direction already. Not having a presence in the world of social media is tantamount to surrendering opportunities to reach out to clients, customers, donors, and those who need your services. The iPad may or may not be the “magical” way to get to that cloud of information, but the cloud is here to stay. Those nonprofits and community action groups who move to it quickly and confidently are going to be in seventh heaven.

Many in the nonprofit world are already building their presence in the cloud, and a few are even ready to have the iPad do their talking: The iPad, in but one week’s public existence and with nary a one sold to John Q. Public, has even become a metaphor for successful management of a nonprofit organization.

Finally, for those of you on the eastern seaboard reading our blog, have a warm and safe weekend – enjoy the snow!