She is the daughter of Roy O. Disney, the brother and business partner of Walt Disney. She was born to wealth, and her name opened doors most people have to try for years to break through. And she is using those resources not only to strengthen the Daphne Foundation in New York City, but also to bring peace to Liberia in West Africa. She also wants to help your organization expand its philanthropic base by reaching out to the bigger fish on your donor list. So please join Abigail Disney for an online discussion group on Wednesday the 26th of January.

Ms. Disney and her husband began the Daphne Foundation in New York precisely because she wanted to help out close to home. According to her autobiographical essay at BolderGiving.org,

With our family fund, called the Daphne Foundation we did something smart. We took the time to list the grantees that really moved us and thought about why. During the reflection process it was torture to say no to requests, but we needed time to get clear. We discovered that we liked to focus on ‘adolescent’ organizations: groups that are no longer “the flavor of the month” for funders but they haven’t reached yet institutional stability. Equipped with this focus, we went seeking our life partners. We have been funding some of the same groups now for 10 years. The Daphne Foundation, now endowed and giving $850,000 a year, has been a third of my total giving. 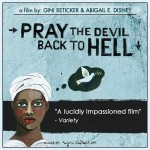 Her experience of growing a local, grass-roots, organization gave her the tools and resources to take on issues overseas as well, and she helped support a documentary film about women peace-makers in Liberia entitled Pray the Devil Back to Hell.

She is aware that her name carries a great deal of weight, and that, indeed, many people shy away from reaching out to her and her organizations. But she also wants to use her name to encourage others to reach out to big donors (like herself).

On Wednesday, 26 January, The Chronicle of Philanthropy will host an on-line discussion with Abigail Disney that will focus on how any philanthropic organization can reach out to big donors with the right approaches. The meeting begins at 12:00pm Eastern time. The opportunity is free, though you must register at the Chronicle for access to the discussion.