A few weeks ago in our Perspectives series we interviewed the Program Director of the Snyder Center for Aphasia Life Enhancement (SCALE) in Baltimore, Denise McCall, and the Technology Coordinator, Jes Porro. That story grew so rich that we set up an interview with Ellayne Ganzfried, Executive Director of the National Aphasia Association, which will appear in our next installment of Perspectives. In that interview, Ellayne was especially proud of her association’s work with Second Stage Theater in New York City, which has reprised the 1978 play “Wings,” written by Arthur Kopit. On Tuesday, November 2nd, Second Stage Theater and the NAA have teamed up for an evening of outreach and fundraising through the play. 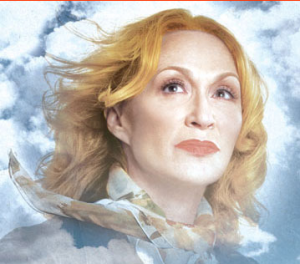 The play “Wings” concerns the fate of a fictional 1920s wing-walker named Emily Stilson, who survives a stroke and must take on the challenges her aphasia presents her. She wants to learn how to take her resources of bravery and risk-taking as a wing-walking daredevil and entertainer to try to rebuild her life through speech therapy with the help of Amy. The characters of the play reflect an amalgam of individuals Arthur Kopit worked with and met after his own father developed aphasia after a stroke he survived.

Second Stage Theater is staging the play with Tony-Nominated actress Jan Maxwell as Emily and January LaVoy as her speech therapist, Amy. It runs through November 21st, and we encourage our readers to see the production. Second Stage reached out to the NAA as it began producing the play, so as to ensure verisimilitude and respect for the condition and those who live it it. According to Ellayne at the NAA:

Second Stage contacted us because none of the actors had experience with aphasia, so they wanted to learn more about aphasia. They wanted their performances to be authentic and respectful. Jan Maxwell actually went to Burke [Rehabilitation Center]. So we came full circle as Jan met people at the center where Arthur Kopit’s father went. I took the other actors to a center here in New York City. And the actress January LaVoy, who plays the speech-language pathologist, met with me and with Mona Greenfield and her group.

That synergy helped spawn the idea of using the performance of the play on November 2nd (after you vote in the midterm elections!) as an opportunity for outreach for the NAA. Along with the proceeds going to the National Aphasia Association, patrons have the opportunity to sponsor a person with aphasia to come see the show as well.  If you are unable to attend next Tuesday, the NAA can offer discounted tickets for other shows through the 21st of November. Tickets can be purchased and further details about the NAA/Second Stage event (or tickets for subsequent nights) can be found by ringing 800.922.4622 or by emailing naa@aphasia.org.

And be sure to read our interview with Ellayne Ganzfried in the upcoming installment of Perspectives, our interviews with thought-leaders and entrepreneurs in the philanthropic, social-action, and mission-based business communities.