George Soros has made billions – yes Billions- of charitable donations over the years, and he has most recently given over $100 million to Human Rights Watch (HRW) in an effort to encourage its autonomous status. His wealth comes mostly from his work as a co-founder of the Quantum [Hedge] Fund through the 1980s, but he is perhaps best known for “breaking the Bank of England” in mid-September 1997, when his fund saw the overvaluation of the British Pound when the government was wavering about how to integrate with the forthcoming Euro.

His rise came after a horrific childhood in Nazi-occupied Hungary, where his family masked their Jewish heritage well enough that he even became a ‘runner’ for the Nazi-backed government as it rounded up Jewish leaders (Soros states in his biographies that he delivered the government’s affidavits and warned the recipients of what awaited them). The then emigrated to Britain and the US, where he was quick to see key investments and even key weaknesses in the economy. He has lived in the Chesapeake Bay region since the mid-1970s, and many of his philanthropic endeavors have been based in the Baltimore-Washington DC region. How have those billions been put to use in the area? 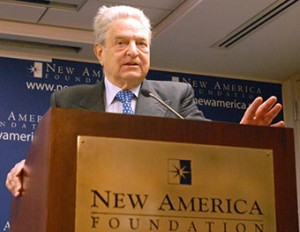 His politics are an interesting (‘awkward’?) blend of social progressivism and criticism on ‘cowboy capitalism’ while his wealth came almost entirely from his gambling for and against institutions within that capitalism. His philanthropic ambitions can not be doubted, though. According to his recent interview for the Baltimore Sun, his ambitions to give most of his wealth away within his lifetime has proved impractical, and so though he continues to give many millions of dollars to the organizations he supports, he accepts the fact that there is just too much to give for an eighty-year old person.

Within Baltimore, The Soros Foundation has concentrated its efforts within the “Open Society Institute,” where Soros believes some great work has been done by people trying to end the drug violence that has plagued the city:

Sun: After 13 years of philanthropic work in Baltimore, do you think the Open Society Institute has made a difference in the city?

Soros: Yes, when I first visited Baltimore 13 years ago, I saw it as a sinking city. Now it is on the rise. We are making some progress because we are tackling the root causes of the big problems facing Baltimore and other cities. My foundation is working closely with city leaders and advocates, all of whom are committed to improving the plight of underserved communities in the city. We strongly support school reform and helped to open 10 new schools. …

Maryland is one of the few states where the prison population is being lowered gradually. This may have been accomplished in part by giving people the drug treatment they need instead of being incarcerated for long periods of time. There is much greater access to drug addiction treatment for those who most need it and, thanks to my foundation’s leadership, there are new ways to treat addiction available such as buprenorphine.

His interests in the city go beyond helping addiction, though. He is a keep supporter of Baltimore’s drive to become the location for Google’s Gigabit Fiber Optic Network, to be rolled out over the next two years. And last year The Baltimore Daily Record reported on ten neighborhood and community health organizations that enjoyed support from Soros’s foundations via matching grants. The funds have proved literally life-saving in the midst of this recession: “‘It’s been very difficult to win private or public money at this time, and we’re hopeful that this money will help us to provide basic services to the city’s most vulnerable residents,’ said Diana Morris, director of OSI-Baltimore.”

His progressive politics have made him some enemies (Soros gave $3 million to the Center for American Progress, $5 million to MoveOn.org, and $10 million to America Coming Together in an effort to unseat George W. Bush in 2004), but Soros’s continued assistance to the Baltimore region has been most welcome, and might continue to support the revitalization of Charm City.