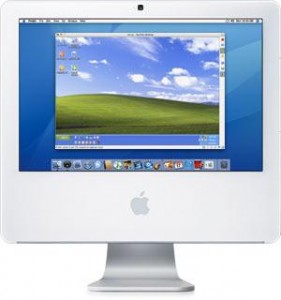 It can be done!

If your organization is switching to the Mac, or looking to switch in the future, you may have a single application that doesn’t have a equivalent on the Apple platform, or it’s simply too costly to change over immediately. Issues such as these might be holding you back from a well-deserved and much needed upgrade-slash-switch.

The good news is that there are three ways you can run Microsoft Windows on a Mac so you can run the odd Windows-only application, if need be. Then you can wean yourself and your staff away from the viruses and shutdowns without sacrificing the occasional app that can only be found for Windows.

1. Install BootCamp and Restart Your Mac as a Windows PC

The first method is one provided by Apple and a part of the operating system called BootCamp, an application that comes with every Macintosh computer. Bootcamp turns your Mac into a dual-boot computer. With BootCamp set up, you can start it up as a Mac or as a Windows PC when the machine first boots up – it’s your choice!

While great for workstations and laptops, the software is not a recommended solution for a server environment. Essentially, BootCamp auto-partitions your hard drive and creates a separate space on that drive with the requisite files so you can install Windows. Apple provides Windows drivers for their machines so that’s one less headache. Your Mac is on the other side and is left untouched and unencumbered.

2. Install a Virtualization Software Package: Your Mac can run both Mac OS X and Microsoft Windows at the same time

The second method, and most popular method, is to install Parallels Desktop or VMware Fusion. These are “Virtual Machine” environments (a software implementation of a real machine, basically an application that mimics a separate computer) that allow you to run Windows and any applications inside Windows as if it were just another application on your Mac. On a Mac Mini Server, this can allow your company to run an application such as the Windows version of Quickbooks, (if you really need the features that Intuit did not  include in the Mac version). All of these apps can run concurrently with anything open on your Mac. It’s recommended to up the RAM to maximum in the mini server for a Virtual Machine.

If you’ve had any issues with Windows, they may still crop up – including the software’s susceptibility to viruses.

3. Use CodeWeavers’ implementation of the open source WINE project.

The final method is from CodeWeavers and it’s called “CrossoverMac.” Crossover allows you to run some Windows applications without actually installing the Windows OS. It was developed specifically to run Windows programs on UNIX operating systems (Like Apple’s Leopard, Snow Leopard, and Lion).  CodeWeavers’ CrossoverMac contains other proprietary patches and code to simplify installation for end-users.

As an example, if you need to access a website that requires Internet Explorer, you can install CrossOver Mac and then install IE to access that website. Check their site for full application compatibility.

Using one of these methods will allow you to move to a Mac without necessarily incurring the costs of changing over everything at once. I’d certainly advise you to use anti-virus software on your PC’s partition or while running the Virtual machine. Therefore, I would also certainly advise you to find a Mac replacement for any Windows application you’re using, but at least you don’t have to do it all at once across your entire organization.

Scott has been writing an extended series of articles about using the power of the inexpensive Mac Mini Server to run your nonprofit’s software and networking needs. Please be sure to read his previous posts as well: Part One, Part Two, Part Three, Part Four and Part Five on peripheral options.

Guest blogger Scott Caldarelli, an Apple Certified Consultant, writes frequently about technology and IT at scottcaldarelliconsulting.com.