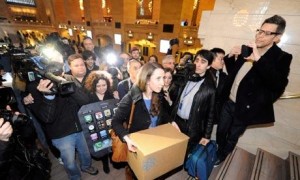 These are protestors of, not customers for, the new iPhone

The reputation of a nonprofit can make-or-break its efforts. Note the stunning blowback and reversal of the Susan G. Komen Foundation when it quietly tried to back out of its relationship with Planned Parenthood. For a business, the reputation can perhaps take more of a beating and still survive. Note BP’s expanding presence in the Gulf of Mexico despite the human and environmental costs of the corporation’s oil spill in 2010.

And then there’s Apple: perhaps the only company that can have a serious court case against its flagship product (the iPad in China), a publicity firestorm and protests over its (suppliers’) treatment of workers, and can still surpass the $500 share price. How is its PR responding to the oxymorons?

Apple’s new CEO, Tim Cook, more than intimated that people will choose faster and smarter phones over labor safety, at least in the general sense. Yet the reactions against the treatment of workers at one of the corporation’s major suppliers, Foxconn, is swelling just as excitement for the iPhone 5 and/or iPad 3 is also on the rise. This particular movement is led by Mark Shields, whose petition concerns two issues:

The first calls for Apple to create a “worker protection strategy” to address how the company will keep workers safe during new product launches, which Shields said is when the most injuries happen due to the need to get a high volume of product out in a short time. The second demand is for Apple to publish the results of the Fair Labor Association’s monitoring of Apple suppliers’ working conditions. (quote taken from The Huffington Post, 1 Feb. 2012)

His petition (signed by over 150,000 people) might indeed get heard because CEO Cook has been at least on the curve of this issue: He has expanded Apple’s audits of its suppliers (something the started under Steve Jobs but pursued without much gusto). Moreover, Apple has just become a signatory of the Fair Labor Association (FLA), and will abide by its decisions once the audits are complete.

Early in Cook’s succession, the questions concerned how he could measure up to Steve Jobs’s ambition, presence, and influence. Instead of Cook being the face of Apple for the keynotes, one wonders if Cook needs to put a face on the company beyond its products. He already has offered to match donations of employees to charities. He now is facing organized protests from SumOfUs and other groups fighting for labor rights and sustainable production. The shiny aluminum shell of Apple seems to be tarnished, and we will learn over the summer months how Apple plans to repolish its image – whether providing lessons as to how, or how not, to do so remains to be seen.