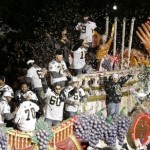 We finish this week’s focus on the five-year anniversary of Hurricane Katrina with much help from Spike Lee’s documentary “If God Is Willing And Da Creek Don’t Rise,” which recently showed on HBO and is periodically being repeated. The followup finds many of the same people who told of their immediate post-Katrina experiences so see how they are faring, and what has changed in the intervening years. Lee begins with the Saints’ Super Bowl miracle victory this past February and how it marked a turning point in the morale of the citizens of New Orleans. Recovery was certainly on its way, thanks to the work of Brad Pitt’s “Make It Right” organization rebuilding so many homes and the rise of sound charter schools in the midst of the New Orleans public education system – among other things. But the improvements also mask some of the ongoing rot within.

To speak of the aesthetics first: the layout and feel of Lee’s followup to his 2006 “When The Levees Broke” is so similar that the latest installment seems almost ‘obvious.’ One senses when the juxtapositions will arrive or the edit will take us back to an image of desolate destruction. Lee’s desire for consistency is important. The city has changed as have the people interviewed, so playing around with the style would have been gratuitous and probably disorienting. Nevertheless, the predictability of its rhythm might make the second installment less immediately engrossing. But stick with the film, for there is still much to shock us out of complacency and forgetfulness about an American city all-but-destroyed.

The diaspora continues five years later, and Lee’s documentary is most interested in what happened to the people who left – and those who returned. Their stories are much less predictable than the rhythm of the film conveying them. Some had to move to other cities and found welcoming communities and better schools. One woman’s move to Houston meant her son (non-speaking Autistic) was not only diagnosed but put into a school to teach him “‘Life- Skills’ – I never heard of ‘Life-Skills,’ but I started crying as she explained to me how they were going to help my son!” I started too. She wants to return to New Orleans, but she knows he will not get this kind of education there (Full Disclosure: I am a native Texan). But the woman who moved so joyously to Utah with her two children ended up having a nervous breakdown as she struggled with the culture shock of white/Mormon suburbia and the guilt of knowing she had generous neighbors who got her back on her feet.

Within the city, the triumphs and tragedies are just as palpable. Mercy Hospital, founded in 1924 and the largest hospital in New Orleans until the early 1990s, is a cultural landmark given the fact that before a restructuring in the mid-1960s, more than half of all New Orleans babies were born there. Its medical staff were so attached to Mercy that they went to start the clean up just a few days after the storm passed. Nevertheless, the city all-but-shut it down a couple of years later arguing it was cost-ineffective to complete the upgrade and cleanup. Lee’s movie traces the fact that private hospitals wanted a piece of the action by buying up nearby sections of damaged buildings and even some equipment from Mercy. The town council saw the deal as too profitable to be stopped solely on the grounds of sentimentality.

Education, or the lack of it and the violence that ensues, was a theme that engrossed me (Full disclosure: I have done a good deal of teaching in my time). The charter schools within the public education system are held as models of recovery and advancement. But many activists in the film point out the salaries that administrators of these schools get, while cherry picking the best kids to attend the schools and keep the averages high (thus ensuring further Federal funding). The school system overall seems, in the film, to be worse than before Katrina (if such a thing were possible – a point many in the film admit). The most heart-wrenching fact of this educational crisis is the violence it engenders. One activist candidly admits that “a predator culture” exists among young black men in the city. Education can get you out, but if you show weakness on the way, you will get pulled down and eaten. Five years on, and many efforts at reform later, but The Big Easy is still the murder capital of the US.

But that violence can not be comfortably tucked away into a problem of “the projects.” A core of New Orleans police officers are shown as a den of self-serving vigilantes if not outright criminals themselves (the story of the Danziger Bridge shootings I found difficult to follow in Lee’s film, but the fact that the police, black and white, went around shooting first and making up reports later was terrifying.). Evidence was manufactured, drugs were confiscated and resold, and citizens were even executed and their bodies disposed of! Five years after the deaths of 1800 people by Katrina, Lee still demands that we see the bodies of the victims of such violence – in this case more shocking still as sometimes it is the authorities perpetrating it – to remember the human costs of such neglect.

The explosion on 20 April that killed eleven BP workers

As the filming of “If God Is Willing…” was winding up, the Deepwater Horizon blew up, killing eleven platform workers (BP, we can now safely assume, have buried the dead and do not fear prosecution). Lee says he just had to get his cameras rolling again to capture this second disaster (from TheBestOfNewOrleans.com):

Was it difficult for you to know how to respond to the BP catastrophe, because you’d been in town since February?

“Our first day of shooting was the Super Bowl. But we were making trips back and forth. What was hard was we had stopped shooting; we were done. April 20 happened and we had to change everything. The problem with the BP thing was that the story was changing every day, it’s a very fluid story, still is [As of 23 August], and it’s going to be for many years to come, so we had to keep pace, and we were shooting as late as two weeks ago. We had to [keep filming, though the project was winding up]. That’s our job, as filmmakers. As documentary filmmakers. This is the biggest oil spill in the history of the world, and it’s not going to be in this?”

This section, perforce, is not as rich as the rest as the destruction of the wetlands takes precedence. Nevertheless, one sees a Louisiana that is getting beaten up in its cities and in its unique coastal environment largely for the sake of profits. And both wealthy white fishermen and struggling Vietnamese shrimpers feel that way.

Indeed, one of the interesting themes of the entire series is the interplay of race and class. Activists seem quick to see racial issues where ever conflicts arise (be it what to do about abandoned properties in the Lower Ninth Ward or founding another charter school or suppressing a demonstration at a City Council meeting). But I could not help but see class division as the greater of the two problems: two police officers at the Danziger Bridge incident were black, many of the protesters at council meetings were white, and I confess my surprise of the number of whites who lived in the Ninth Ward when the levees broke. The people shown living in the new houses built by the “Make It Right” foundation are black and creole. But the class divisions are huge. The rich of all colors got out of the city easier and got back to the city quicker. They made decisions that affected their poorer brethren who could not return and probably did not have the resources to influence governance even if they did. (Now ‘Former’) Mayor Ray Nagle is largely seen as an unfavorable mayor in the second film, having received praise in the first one. His detractors speak of him as an ‘Uncle Tom’ and a ‘passing candidate.’ I tended to see a pretty wealthy politician siding with interests that ensured his ongoing fortune. But my opportunity to have my view is perhaps the subtlest success of Spike Lee’s documentaries: Though we have no doubts where his sympathies are, he lets the people talk. No narrator explains what we are looking at or what we have just heard. The optimists and the pessimists, those who stress race and those who want to bring equal opportunity to all classes are given time to talk, and the viewer is given time to reflect on all sides. Watch the films if you have not, and get involved if you can.

Happy Labor Day Weekend! We will be refilling our blog’s well of topics on Monday.