You’ve probably seen a growing presence of QR (‘Quick Response’) Codes in your daily life: they can be found on price labels at numerous ‘big-box’ stores, they are often included on public boards and advertisements (like at bus stops or outside sports stadia), and they are starting to show up in traditional print media like newspapers. QR Codes are, in fact, gateways to a wealth of e-information, and your organization should be using them too.

Though its presence seems really to have expanded only in the last 2-3 years, the code was developed in 1994 in an effort to pack greater information into the traditional bar code. The bar code can hold up to about 20 numbers, whereas the QR Code can hold over 7 thousand numbers, and letters, in its hypnotic black-and-white cubes.

How does one gain access to its treasures? What makes the QR Code useful? And how might nonprofits benefit from a technology designed to assist packaging warehouses and logistics?

The code was designed to pack more information into a similar space as a bar code, all while accentuating contrasts that would allow scanners to read it from a distance (Think of how often you must scan that jug of milk and its bar code at the self-service cash register at the grocery store.). But its presence in the larger public sphere exploded once developers created software that allowed smartphone cameras to act at QR Code readers. Snap a photo of the code with a reader, and the reader/scanner does what is programmed into the code: open a website, prep an email, offer a coupon, encourage a donation…

Besides the fact that the QR Code can be read by anyone with a smartphone, another really useful aspect of the code is its built-in ability to correct errors in reading the code. Indeed, the algorithms of error correction can be expanded exponentially, which means your organization can intentionally embed all kinds of ‘errors’ in a QR Code, yet still have it provide the necessary information to the phone and thus to your client. 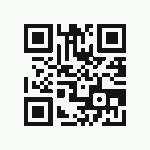 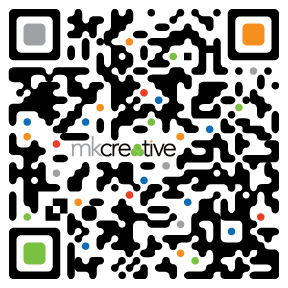 When you could have this? (Go ahead: scan this with your smartphone's QR Code reader)

The MKCREATIVE QR Code (to the bottom right) contains the ‘errors’ of colors, rounded corners, and the text logo through the middle of the code. Yet those ‘errors’ make the code much more attractive than a box of boxes, and they allow human identification and branding consistency even before the code sends the viewer’s cellphone off to find further information about our creative-services agency.

Nonprofits should be taking advantage of this technology (and many do) because one need not get the perfect scan to get the pertinent information. Thus codes put on t-shirts and other swag for events, or on handouts, or even placed on your organization’s business card can promulgate useful information even if the t-shirt is wrinkled, the handout folded, or the business card scribbled on.

The basic code is simple to create; branding and customization of the design (as seen with the MKC QR code) is a little more complex. That said, the code should be appreciated for its ability to become a work of art and of branding in its own right – a process that takes a bit of time and expertise.

Think about the ways your nonprofit distributes its website, offers information on the latest events it is hosting, and encourages people to make donations. Why not tap into the coolness and convenience of the QR Code? And be sure to present it in an informative and visually appealing manner. The investment will pay great dividends as more and more people become aware of their power.