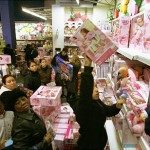 Welcome back from Thanksgiving. And, if you are like some 212 million of your closer friends, welcome back from shopping. Sales figures for ‘Black Friday‘ (the day many stores move from the debt of red ink to the black of profitability in their books) looked stronger than they have in a while, according to The Wall Street Journal: “The number of people who shopped at stores and online between Thursday and Sunday jumped 8.7% to 212 million shoppers, according to a National Retail Federation survey of 4,306 shoppers conducted by BIGresearch.” The bar has been pretty low the last two or three years, but the question is whether a vibrant Black Friday means a growing economy.

Not only were the body counts up (No pun intended: Black Friday often means scuffles and injuries at door-busting openings at 4:00am, but the last deaths at such an event tragically occurred in 2008, after years of relative safety.), but so were the amounts spent. The WSJ reports the average shopper spent over 6% more than he/she did on Black Friday last year.

In recent years, we also ‘celebrate’ Cyber Monday, which has grown to be the busiest online shopping day of the year. This year’s Cyber Monday has also been better than recent years, though we are still far from our bubble-induced shopping frenzies of a few years ago. According to CNNMoney.com:

Merchant websites drew 1,333,336 global page visits per minute during the noon ET hour, according to e-commerce tracking company Akamai. While that was a solid number, it was actually a little below the noontime peak of 1,337,601 page visits per minute globally three days earlier, on Black Friday, which is supposed to be the big day for traditional stores.

Cyber Monday is a more recent phenomenon, though it already seems a bit dated: In the mid-1990s, as online retailers like Amazon, eBay, etc. were starting to gain a foothold in the holiday shopping market, people forewent their dialup connections at home and waited to get back to the fast internet connections they had at their offices. Thus Cyber Monday proved to be the most profitable day of online sales, yet the least productive day in the nation’s offices.

But nowadays, many more people are on at least descent DSL lines at home, which makes the ‘need’ obsolete, or at least ever rarer. Moreover, the Great Recession has spurred retailers to keep up with the deals well beyond this four-day shopping extravaganza.