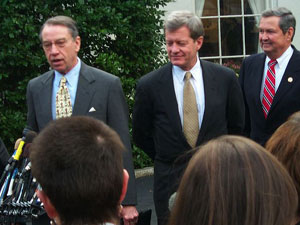 News sources, pundits, entertaining commentators, irritating commentators, restoration rallies, and $3.5 billion in spending have all been leading up to this day. You’ve probably made up your mind and/or cast your votes, or you will be doing both in the next few hours. We want to join in the chorus to Get Out The Vote, and MKCREATIVE recently tweeted the latest video/Facebook/political/future-past parody mashup by MoveOn.org’s CNNBC ‘network’ (Disclaimer: the resulting video implicates you in the fate of nation in 2050 and is not bipartisan). But we realize that we’re likely preaching to the choir. What to do between casting your vote and hearing the analysts telling you what your vote means?

Finally, you might want to start planning for the 2012 elections, given the fact that campaigning for them begins on tomorrow morning’s talk shows.