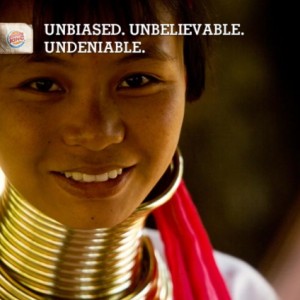 The world-wide awareness of Old Spice brand got a huge lift out of its revamped “Old Spice Man” commercials, Facebook page, tweets, and video postings this past half-year (Full disclosure: I bought some Old Spice stick this weekend for the first time, solely in recognition of the humor and success of the campaign. Whether I buy it again remains an open question.). It was not the first such viral campaign to have a phenomenal impact on the brand, nor will it be the last. But it has been successful, according to many analysts, precisely because the folks at Old Spice, and at Weiden + Kennedy, prepared the groundwork by considering the product, the market, and ways to control the message (among other things). Most efforts at viral advertising do not work as well, but by their very nature their failure makes them difficult to track. But here are some examples that other media gurus point to…

The ‘Whopper Virgins’ campaign from Burger King (2007-2009) was seen by many as a middling success. It was designed to have a global approach, a humorous effort to find people who had never had a hamburger at all to taste-test the Whopper, and thus offer a serious challenge to their competitors. Though the Burger King/Whopper brand expanded recognition, the campaign drew many criticisms, some of which could have sunk the brand: “While many experts commended the viral marketing campaign for having helped in brand recognition, many others criticized the campaign idea, describing it as offensive and culturally insensitive. Some ad experts also pointed out that due to errors regarding search engine optimization techniques in the viral strategy adopted, the campaign had not been effective in garnering as much of a reaction as intended. Critics also raised questions about the authenticity of the taste test conducted by Burger King.”

SocialEmailMarketing.eu wrote up a comparison of the efforts to stir viral interest in the movies “The Dark Knight” (2008, a success) with “Aqua Teen Hunger Force” (2007, a failure). The issue here was an effort by the advertisers of “Aqua Teen Hunger Force” to stir up interest with discretely displayed movie character with the wiring to communicate with mobile devices as people moved around the city. “While they achieved awareness, it wasn’t for the reasons that they intended. People mistook the circuits for bombs, police teams were dispatched, and the whole episode turned into a nasty marketing failure for the film.”

Perhaps the largest viral success was for Evian bottled water, in which a video shows babies cutting some wicket roller skating moves around Central Park, thanks to the vivifying qualities of the water. As with the others, TV spots and print advertising were meant to work hand-in-glove with the promotional web video. The last of these became a pop sensation, inspiring repostings, comments, and remixes – all of which drove the campaign to be” #1 on YouTube, #1 on Viral Video Chart, and holder of the World Record for most viewed ad online.” Guess I better buy some Evian when I need more Old Spice deodorant.

A common theme here is that these products have corporate funds to support corporate advertising firms – two luxuries the not-for-profit and mission-based sectors of the economy rarely enjoy. But financial limitations are part of what make viral marketing such a tempting and lucrative goal: the costs of a campaign, if handled properly, could go viral without necessarily great production expense. Some of that, though, is good luck: catching people’s interests when they are ready to act on those interests.

Beirut’s blog at ThoughtPick.com points out that luck might be part of the equation, but some good planning to avoid some bad mistakes is critical. Things like “Revise your marketing message once, twice, three times and even more to make sure you will get the least amount of attacks or negative feedback from your audience.” “Do not try to sell yourself too bluntly. If you feel you have a need to do so, do it through communication and involvement with communities and individuals on different suitable social media channels.” Or “Learn when to stick to the ‘old school style’. The ‘more the merrier’ concept does not always work. Remember: sometimes less is more!” And perhaps most importantly, given the statistical fact that precious few campaigns hit a critical mass to be considered viral – and numerous other simply stumble over their own feet – “If you mess up by mistake, always have a “damage control” plan. Luck is overrated and you need to be prepared in case anything goes wrong.” Like letting just anyone design your next SUV’s commercials.

Building buzz requires some patience and timing and hard questions about who you are trying to reach, how you are trying to reach them, and why you want to reach them. Sometimes listening to what your constituents and supporters have to say is the best way to go ‘viral’ among those you hope to turn into constituents and supporters.