A new technology is invariably difficult to put down for the fearless first adopters. Those who move more slowly toward that technology might feel intimidation from those who adopted early and have since honed their skills. Those who waited might also begin to ask if adoption is even necessary. Such a dynamic might be especially acute in the world of social media, almost invariably multi-million-dollar enterprises that began as projects for recent college grads. But as social media head toward a certain maturity and expectation, are such networks really useful for corporate entities and/or their boards? 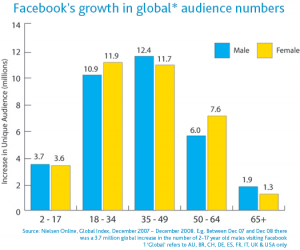 Social media (MySpace, Facebook, Hi5, Twitter…) began as ways for individuals to present themselves to ever wider groups of peers. Clubs, bands, and community groups quickly followed, advertising their meetings, concerts, and agenda. Even in the early days (ca.2003) when the choice was really between only MySpace or Facebook, newcomers to the medium could gather information to help them decide which network to ally themselves with and for what reasons. The explosion of networks and users created its own momentum, and by 2007 all demographics were getting involved (albeit at different rates). With so many people joining in, community groups, governments, and corporations were bound to get involved. But as these sites were designed to present ‘individuals,’ organizations had to work out their own ways to make use of such social media. Some snafus and snarky comments were inevitable, which might have slowed adoption for still others. Moreover, social media seems to encourage the announcement of personal information to the wider world, which might be fine for a 20-something individual, but might be cause for concern when a corporation bares too much.

Over the last fourteen-odd months, though, an interest in social media as a meaningful and precise tool seems to be swelling. Wall Street’s bungling and bailout have likely been factors that have encouraged other businesses to (re)consider social networking as a way to reach customers and clients in an inexpensive and permission-based manner.

Beth Kanter’s blog at Socialbrite.com argues clearly and convincingly that with some planning community groups and small businesses can gain a great deal with the use of social media. Ms. Kanter compiles a number of interviews she did with CEOs from organizations of various sizes and around the world, so she has her own experience as a consultant, as the experiences of those in the hot seats of their companies. If you are still wavering, her tips include at least two points that should reassure: 1. Listen first to discover what your peers are doing in the realm of social media, and to get guidance from individuals within your organization who might already be comfortable with the technology, its etiquette, its expectations. And 4. Pick a small project first, because social media is stunningly scalable, so an intra-office blog/tweet might allow some practice before reaching out to the wider world. Indeed, as Kanter also points out, some simply will not be comfortable with the medium and want to delegate responsibility for it. She then introduces some of the ways CEOs still might want to monitor the outreach.

Beth Kanter’s blog is full of links to others’ advice on the subject, as well as to the practical uses of social media by the folks she interviewed. An excellent start to consider the move to social media, as well as a fine resource to polish your organization’s practices.

#HOWTO: Setup A (Free) Scoop.it Magazine For Your Community