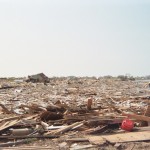 A neighborhood of east New Orleans after Hurricane Katrina

The hurricane was tracked for a week before it made landfall in western Mississippi. We knew it was coming and had ample time to move people out, to board up homes, to store up supplies… Instead, the planning from the federal administration was desultory, and many within New Orleans admitted that they thought they could just wait out another hurricane, even a Category 5 one. None planned on shoddy engineering from the Army Corps of Engineers. When the levees broke, 200,000-300,000 people were driven to their roofs or out of their neighborhoods, and some 1800 directly to their deaths. Though many in fact escaped with their lives, none of their homes survived. None. If the sweep of water did not dismantle them outright, seepage and mold and a couple of years of abandonment ensured their destruction once heavy machinery and big money returned to the city. In the (ongoing) interim?

The destruction of New Orleans is perhaps the worst forced exodus of people since the removal of the native Americans in the south in the 1830s to lands west of the Mississippi River (The ‘Trail of Tears‘). An estimated 200,000 people fled New Orleans if not Louisiana, with little more than they could carry and with precious little legal proof of their rights to the destroyed homes many of them would return to.

A strange irony about the struggle for housing (at least for this outsider), was the fight among residents of damaged ‘housing projects’ in New Orleans to keep those projects open, rather than have them torn down or updated. At the time, the protests even got violent:

The fight over why inhabitants wanted to save what all agreed were some of the oldest and roughest projects in the nation pertained to the fact that they had no where else to go (in 2006). The struggle was not for better housing, as described by a couple of the inhabitants in the latter part of the video clip, but that there would be no housing for them if the council went ahead with its plans to sell the land to private developers (The vote ultimately was unanimous to sell the land).

In the interim, FEMA shipped tens of thousands of trailers to the area for temporary residence, though these trailers became the source of a second wave of tragedy, as many of them were laced with formaldehyde and caused widespread sickness among the already weakest of the community. Subsequent documentation proved that FEMA officials were aware of the problem, but hoped to save the money.

As FEMA struggled to move pre-made shelter, Brad Pitt and an entourage of movie-industry colleagues set about using their cultural and economic clout to start a rebuilding process themselves. From their efforts, “Make It Right” was born. The name captures not only the effort to make right all the problems and injustices of the rebuilding effort thus far, but to make the homes right: green, solar powered, on platforms to survive floods… The program caught the attention of neighborhood groups, housing advocates, greening associations, and even the elite of the architecture industry, who are rarely drawn into such wide-scale projects. Five years on, he continues to stress the fact that the work is about the neighborhood, not him:

Housing remains the major concern in the region, especially as bursting of the credit bubble in 2007 has raised unemployment and added stresses to a stressed environment. Even the “Build It Right” community admit that what was possible for sections of New Orleans is likely to be scaleable without significant government support – which continues to be unlikely in the present antagonistic political environment in which quick raps against the other party are of greater value than getting housing assistance to thousands of voting citizens.