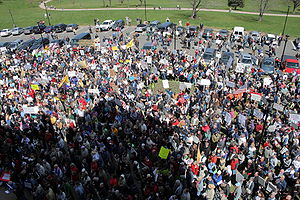 Yes, the elections were a whole week ago. The new Congress will not be seated until January 2011, anyway. But some voices in the nonprofit world are still responding to the former and preparing for the latter. We would encourage our readers in the mission-based community to continue to do the same. A note of caution, though: If truth be the first casualty of war, open-mindedness can be the first casualty of a mid-term election.Leslie Lenkowsky, a professor of public affairs and philanthropic studies at Indiana University, posted a commentary about how the Tea Party (Parties?) suggest a civic engagement that should be welcomed by the philanthropic community. His words, posted on The Chronicle of Philanthropy at the end of last week, concerned not the policies of the various Tea Party candidates or their groups but the fact that they “embrace of the kinds of methods that community organizers have long championed.”

He argues that the Tea Party writ large – even if supported by undisclosed corporate backers – grew from an organic desire to be involved and to change the political landscape.

The rise of the Tea Party movement, in short, suggests that fears of civic disengagement in the United States may have been exaggerated. When motivated by a compelling set of issues, it seems that Americans can still put together an impressive campaign, spontaneously, swiftly, and with little professional leadership or guidance. Whatever their inclination toward “bowling alone,” they are capable of working together when necessary. For that reason alone, the philanthropic world should find at least some comfort in the Tea Party’s accomplishments.

We would like to agree with the point that the Tea Party represents civic engagement, but the evidence against the movement being ‘spontaneous … and with little professional leadership or guidance’ is simply overwhelming. And the argument frays still further:

Nor was election-oriented corporate money, made possible by the Supreme Court’s ruling in Citizens United v. Federal Election Commission, a big factor. This was partly because such support is usually directed toward political committees with few, if any, members—in many ways, the opposite of the Tea Party groups.

The statement both argues that no meaningful connection exists between Tea Party groups and corporate-sponsored PACs while suggesting that corporate sponsorship might prove a challenge to the Tea Party. The fact many such PAC and SuperPAC ads expressly link themselves to the Tea Party seems to have been forgotten.

Nevertheless, Professor Lenkowsky also raises a point true enough to sting progressives: “[The Tea Party] is a rare example of a grass-roots effort that seeks to reduce the influence of government, rather than expand it, to solve the problems that led its members to get involved. That is what has caused so many leaders in the philanthropic world—who often see government as an important ally—to be apprehensive about it.” Could it be that philanthropic organizations really want only a certain stripe of political activism from the electorate?

Certainly many those who have posted comments to his piece were stung. The first: “This op-ed is so shockingly wrongheaded, misinformed, and naive in its assumptions, that I don’t even know where to begin to address all of its failings. Chronicle, your politics are showing — and they’re not pretty.” And (from the other side of the spectrum): “Some of the most reflexively intolerant people I’ve run across are the liberal (now branded progressives, since liberal is apparently a bad word) intelligentsia While they espouse public discourse and free speech, many seem quite surprised to find others have an opinion that runs counter to theirs and prefer to muzzle those contrarians.”

Fortunately, some level-headed participants spoke from ‘either side of the political aisle’ once the heat had burned off. TGWEISS contributed this point, which makes a poignant summation (and segue):

Whether you agree with the Tea Party or not, the point that Mr. Lenkowsky makes is that 1) civil society is alive and well in America and 2) a more active citizenry on the whole is not a bad thing for philanthropy because resolutions and consensus can be reached on important social issues.
If your reaction is to look at the Tea Party movement as a threat to philanthropy, you are destined to lose. The organizations that have learned to adapt with the constantly changing face of the government and politics will continue to thrive. Stop complaining and start adapting.

‘Adapting’ is just what the Council on Foundations is encouraging its members to do (and as we reported last week). Steve Gunderson of the CoF’s CoFInteract.org blog announced the opening of registration of their annual “Foundations on The Hill” meeting, to be held March 8-9 in the nation’s capital. His post went on to enumerate three ‘opportunities’ to work with the new Congress and the political tides that have raised it.

1) We have an occasion and a responsibility to educate Congress about philanthropy’s role in society. We also need to create a new index of key contacts and relations. Please let us know if you, your trustees, or your major donors have a close relationship with any newly elected members of Congress. We want to begin these conversations very soon.
2) We have a requirement to create an environment that grows philanthropy. We know an inter-generational transfer of wealth is occurring today. And we know we lack the right incentives and structure to shift some of this transfer of wealth into philanthropy—especially in rural America. We should make this a priority.
3) We have a role as an independent source of innovation, which probably is needed now more than ever. When there is a vanishing middle class, there is a significant degree of economic, political, and social instability. This is serious, and it is real. Philanthropy’s investments in education reform and workforce development are essential to rebuilding a strong middle class in America.

The Council’s call to education and information is one that should resonate across the land and across the political spectrum.