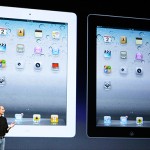 The features and influences of Apple’s iPad have periodically shown up on our blog. Now that the iPad 2 has been out for a few days, we wanted to give our readers a feel for what people are saying about it.

For openers, the iPad 2, like the iPhone 4, can be had for either the AT&T or Verizon cell networks. The two networks are not compatible in hardware or software, though, so by buying a model for one network will not give you the opportunity to sample the other, or even attempt software hacks (usually described as ‘jailbreaking‘) to change between these particular providers.

But what else puts the 2 into the name, and what do the experts have to say about the changes?

For many reviewers, like the folks at Engadget, the biggest changes are cosmetic, which is to say ‘thin,’ not ‘shallow:’

From an industrial design standpoint, the iPad 2 just seriously raised the bar on sleek, sexy computer hardware. If you’re an owner of the original model, you know it was no slouch in the design department, but its latest iteration takes it to a whole other place. The first thing you’ll probably notice about the iPad 2 is that it’s thin — unbelievably thin. At its thickest point, the tablet is just 0.34-inches (compared with the first iPad’s half an inch of girth).

The iPad 2 has a new, faster, processor chip, but the memory (RAM) is the same 512MB of the previous model. The screen is the same size and resolution as well.

The addition of two cameras (front and back) is likely to be the most striking addition/upgrade for most users. That the cameras are there as pleased many reviewers. The quality of images, though, has not been to many people’s liking. “[The addition of cameras] was probably the #1 request from users. The cameras (front and back) are there, but I’m disappointed by them because the image quality is poor. Even in a well-lit room, images shot with the back camera are noisy. The front camera is even worse.” (From Ubergizmo)

The biggest drive for the two cameras is not photography, though, but to use Apple’s ‘FaceTime’ app ($.99) to make video calls, as Apple laptops have been doing for years via iChat (Skype, or other Third-Party applications). Rob Pegoraro at The Washington Post was disappointed with still shots from the iPad 2, but was rather pleased with the results from video chatting.

The development of Face Time on the iPad 2 (development that will surely continue along with the iPad3) could bring inexpensive opportunities for organizations and charities to hold meetings with donors and volunteers in situ. The immediacy of such discussion and exchange of information could mean a wonderful sensitivity and emotional connection to a changing situation (think of volunteers reporting from a site in Haiti to a fundraisers’ luncheon in Washington DC).

Out of the box, FaceTime will only work in a Wi-Fi network, but people are working out ways to use the more widespread 3G networks to carry the conversation – without jailbreaking or manipulating any code. If the addition of FaceTime is your must-have feature, or your how-does-it-work question, here is a video review of it in action (from the folks at PhoneArena.com):

If you bought the first generation and want to make the upgrade, what will you do with the original iPad? Apple is asking you to donate the iPad to teachers in the Teach For American program. A noble cause, but hardly one that suggests Apple is rethinking its corporate-responsibility strategies.

Do you use an iPad/iPad 2 for your philanthropic/fundraising/non-profit work? We would love to hear what your experiences have been and how you have incorporated the svelt tablet!