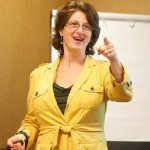 Debra Askanase, founder of Community Organizer 2.0, is an “engagement strategist” who consults with nonprofit organizations on digital media. She is also a strategist for Socialbrite. Her background includes a decade of community organizing experience, followed by seven years in community economic development. The interview was conducted by Don Akchin, a principal of Nonprofit Marketing 360 and a frequent contributor to the MKCREATIVE blog.

MKC: How did you get into digital media? Did you reinvent yourself?

DEBRA: Yes, but it also seemed a pretty natural progression. I started off as a relatively traditional community organizer with multi-issue/low-income organizations. I moved into tenant organizing as well, then into economic development. I saw many of the same skills in leadership development that I saw in community and economic development. I worked with low-income immigrant entrepreneurs to start businesses. After doing that for seven years, I became very interested in business, from the perspective of how business can change society. So I went to business school and there seemed to be a confluence at that point. Social media was just gaining traction – this was 2007 and Facebook had just opened up beyond the college crowd – and I made that leap, intuitively, that social media is really community organizing. Here’s an opportunity where I can use my expertise in business strategy that I had been doing for seven years and my understanding of how people come together to change things. And I wanted to bring that interest to nonprofits. My entire experience had been working with nonprofits, so I understood that world from the ground up.

DEBRA: Community organizing is about trying to change systems in society by bringing people together to do what they could not do by themselves. Most would describe the change as changing a power dynamic. Social media is the same principle of bringing people together who by themselves cannot bring about the change. It amplifies the voice and allows the voice to be heard.

MKC: You describe your blog as a ‘forum.’ Has it worked out as you expected it to be?

DEBRA: Sometimes I really think it is, actually! I have gotten some wonderful conversations going. That’s the part I love the most, when people point things out and argue ‘You’re wrong!’ or ‘I disagree with your thinking.’ And I’ll usually just admit it, and tell them that I really should have thought about that point. Any good blogger needs to be transparent in that way: ‘Yes, thank you for pushing my thinking on that.’ Of course I’d like to have still more conversation than I have, but I’ve noticed, just anecdotally, a trend that there are fewer blog commentators nowadays.

A lot of my blog posts are also posted on Socialbrite because I’m a strategist with them as well. And they have different kinds of conversations over there. Sometimes Dan Brown of Jewish Philanthropy will post one or two of my stories, and that is an entirely different conversation. Sometimes I’ll go back to a blog post and tell readers, ‘There was an interesting conversation on this post reposted over there… please go check it out!’

MKC: When clients approach you, what is it they think they are looking for, and is it what they are really looking for?

DEBRA: They all seem to approach me for the exact same reason: they want money! I’d say probably more than 50% say they want to get into social media because they need to raise funds from individuals. Relying on grants or big donors or the government is not the future for them. They can see that it will be small donations for them in the future.

Others come to me with fairly practical needs, ‘How do I do the Facebook thing better? Should I be on Twitter?’ What I try to do is ask back a couple of questions: One, ‘What is the problem you are trying to solve?’ It may be that they do indeed need more donors, but when you peel back a layer you realize that they may not have enough people who care deeply enough about their issue to donate. Or that those who care deeply about them are not active in social media, so they are not going to be reached this way.

The second thing I ask is about engagement. Often it’s just about working out what people want to talk about in online spaces, how working through that subject can really build online engagement and loyalty and trust between the organization and the people who are communicating with it online. That’s often the thing organizations don’t know that they need, or they realize they don’t have that connection but don’t understand why. That’s where I feel I can come in as a social-media organizer. I can look at what’s happening in a social space, in an online community, and I can pretty quickly identify where there are some missing elements or where they are not engaging the audience and why.

MKC: The evidence seems to show that social media is not a direct path to fundraising. Are your clients surprised or disappointed by this?

DEBRA: I got a lot of surprise early on as I tried to stress that fundraising is the end of a long path. I think people are a bit savvier about this now. In fact, a client who just hired me noted when I brought this issue up, ‘Yes, we know. We want to look at this project in a year or so to see how we’re doing with fundraising.’ For many that is the end result: How does this project ultimately support the organization? How does social media sustain the overall plan?

MKC: Can you give me an example of what you mean by ‘strategic digital marketing?’

DEBRA: It’s about thinking about the problem you are trying to solve and what are your organizational goals? What are your program or administration goals? How would social media support any of that? Social media is just a tool. It’s a communications tool, it’s a programming tool, it’s a development tool. If it’s not used as a tool strategically, then it’s just a tool sitting in your toolbox that you don’t know how to use very well.

MKC: Is there an example of social media that you’d say is not strategic?

DEBRA: There’s always the organization that stresses the fact that, say, they have 2000 people who Like them on Facebook. That’s a respectable number, assuming it translates into something you want it to do for your organization. Just being on Facebook, even if posting every day, and having conversations is great, and maybe some people are engaged. But it’s not strategic unless you know why you’re involved in that community and what you want that community to do with you, and measuring it all to make sure you are getting out what you want to get out.

MKC: Is social media a tool you think all nonprofits should be using?

DEBRA: Absolutely. But I also believe that social media alone will not accomplish your organizational goals . You have to layer it with email, e-newsletters, video, print sometimes, sometimes pay media. All that together creates a multi-channel strategy.

MKC: How can nonprofits prove they’re getting a good return on investment for their social media efforts?

DEBRA: I think social media has become easier to measure. We were all really fumbling around in the dark for a while. Now many smart people think about it. I think of it as ‘Return on Engagement,’ which asks, ‘What is the return on the actual conversation that we’re having?’

Let’s take an example on Twitter. You’re a health-care organization and your goals are health-care policy and advocacy. Are the folks on Twitter actually helping you with the goal of forming health-care policy and advocacy? And you can measure that out. You have 593 followers on Twitter, but when push comes to shove, how many are actually sending tweets to legislators as you’ve asked them, or asking their friends to sign a petition or having them forward that tweet? If those things are not fulfilled, you need them fulfilled. What do you need to do to achieve that?

There’s also this concept of Return on Influence, which is, ‘Who out there can influence a lot of people to do something?’ If you care deeply about something, and you know someone who will tweet 5000 people to do it, that’s a person whose relationship you want to cultivate. So you want to look for that Return on Influence, and look for who in your circle as a nonprofit seems to influence lots of people. And there are tools to measure that.

The last thing is your strict metrics. There’s lots of ways to look at it, but don’t forget Google Analytics. You have a campaign going on your website, and you look at the numbers to see if people are coming in from Twitter, from Facebook, from LinkedIn and look at what activities you present and how people respond. Measure. Measure. Measure.

This interview series is produced with the generous support of the Nonprofit Marketing and Fundraising Zone.

#INTERVIEW: Rob Wu of Causevox Tells Us About Developments In Online Fundraising (Part I)